I’ve always been fascinated by the late 19th century criminology texts that try to decipher the mystery of why some people become criminals and others don’t…and then ascribe certain physical markers to be symbols of that criminality—visual cues then deployed as predictors of criminal behavior. Tattoos became one of these supposed indicators, and a wealth of books and journal articles devoted pages to trying to read deviant meaning into the images inscribed on incarcerated people (as well as the shapes and sizes of their heads, the character of their facial features, the proportions of their limbs, and all sorts of other ridiculous body measurements and surveillances based on the eugenistic pseudosciences of things like phrenology, craniometry, etc.).

There’s a major problem, of course. When one is only studying tattoos on incarcerated populations, and not at the same time studying tattoos on non-incarcerated populations, one’s perceptions get easily skewed toward tattoos being markers of deviance. It does seem to be true, from later, more objective research, that imprisoned people tend to get tattooed at a higher rate per capita than the general population, but my hypothesis is that this is a reaction to the depersonalization—the stripping away of one’s pre-prison identity; a relatively easy way to reassert one’s identity is to indelibly inscribe personal symbols on one’s skin (perhaps why we also seem to find higher percentages of tattoos among groups in uniform, like soldiers and sailors, both of who at times live in small, regulated, impersonal, non-private spaces like barracks and ships). Also none of the studies that I have read in depth from this time make distinctions between tattoos inscribed pre-prison, those acquired while incarcerated, and those rendered in the periods between bouts of recidivism (as most of the subjects studied were repeat offenders).

Some of these late 19th century criminology texts have incredible renderings of the tattoo motifs found on incarcerated individuals, and, as a tattoo historian, I seek quite different meaning from them over a century later. What these tattoo images tell me is simply that people from diverse backgrounds ended up in prison. And as such, the tattoos offer a cross-section of the types of images that were seen on the general population as a whole in the mid to late 19th century.

(A detail from “C. L.”‘s tattoos above showing a real mishmash of motifs–from them we can determine that he was probably a farrier or in some other horse-related profession, had served in the Navy, had someone close die, liked ladies, liked the circus, and enjoyed his drink.)

A few months ago, I was browsing the stacks at the University of Chicago Library to pick up a copy of Lombroso’s classic 1876 L’uomo deliquente (“Criminal Man”) to post some images on Tattoo History Daily for the irreverant Valentine’s Day series I was doing (you can see some of those images here, and here, and here). As I usually do, I took the opportunity to shelf browse—to scan over the books adjacent to and on the shelves nearby to see if anything jumped out as potentially interesting for my research. I spied a German criminological text with which I was not familiar (the words “Verbrecher” and “anthropologischer” on the spine caught my eye), and the binding looked like it was probably at least from the early 20th century. Worth a shot…

I pulled the book off the shelf and started browsing through. I was excited to see a date of 1893 on the title page and the table of contents reflected a typical criminological study from that time, including a section on tattooing, which I jumped to immediately. There were no pictures in that section, but the 16 page subchapter on tattooing definitely made it a book worth checking out. Then I got to the plates section in the back and was astounded! Usually the renderings of tattoo motifs in these texts could be described as passably amateur, at best. But these were beautiful, delicate line drawings, lithographically printed, some with red coloring in addition to the usual black. 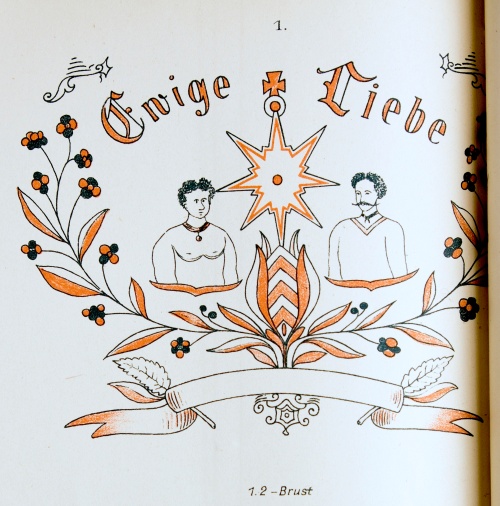 (Arguably one of the nicest tattoos of the lot. Sadly the plates are bound tightly into the binding of the book, so this gets cut off at the edge.)

And the plates offered such a wide range of images including many motifs I had not seen before. There, of course, were the usual maritime images from former sailors who had ended up on the wrong side of the law, religious motifs, memorials, and occupational emblems of all sorts. But I also found a number of tattoos of images of circus performers and a whole host of drinking-themed tattoos! 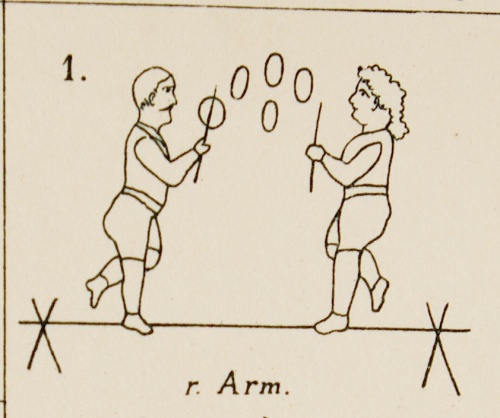 (Juggling tightrope performers, see above for a weightlifter and below for an acrobat.) 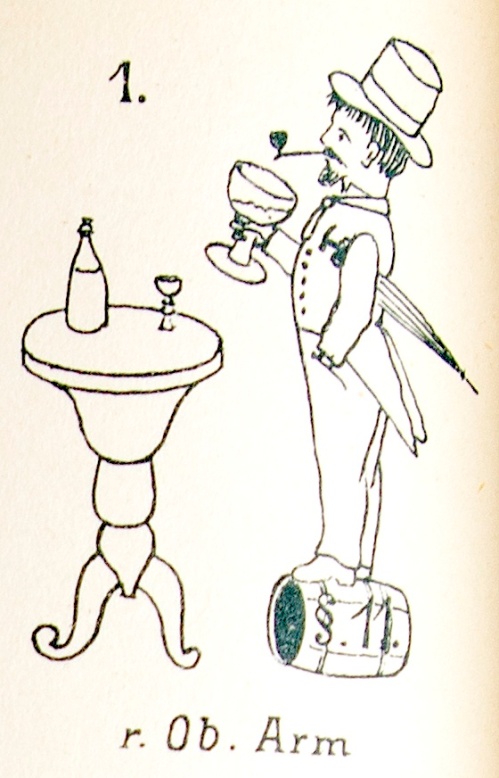 (Drinking while balancing on a barrel.)

Since the book was published in 1893, and O’Reilly’s electric machine was only patented in 1891 (although there certainly were experimental precursors), these images also offer a wealth of visual evidence of what pre-machine tattooing looked like. Most, if not all, of these images were rendered by hand poking, and because of the time-consuming nature of that technique, aesthetically we find mostly line drawings with little shading or coloring. Some of the images may be quite old indeed—while a date on a tattoo image can not always be used as the date of inscription (think of memorial tattoos with death dates done years after a person passed away), often they do capture a moment in time. Thus the tattoos with dates of 1856, 1869, and 1871 might in fact be from those years.

Enjoy some more of the images! What I’ve posted here are a fraction of what one can find in the book. And in case you’re wondering who Abraham Baer was, a quick search didn’t turn up much about him, but you can find mentions of how his work fit into German criminology research at the time in three sources: a book, a dissertation, and an essay in an edited anthology. The title translates to “The Criminal in Anthropological Perspective”.

(This homely image really speaks to me as to the faithfulness of the draftsman in reproducing what these tattoos really looked like, which makes the beauty of some of the others all the more impressive.) 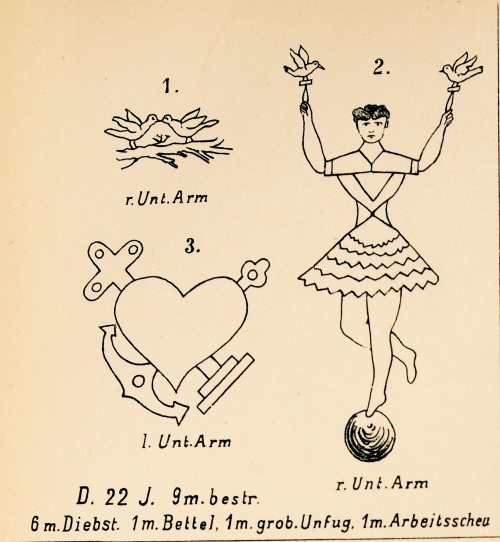 (A lovely circus lady balancing on a ball with doves.)

(Gentleman about to duel with umbrellas???) 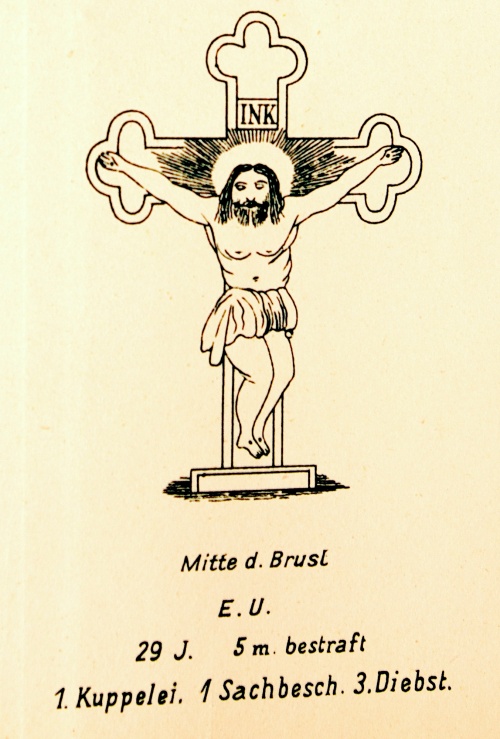 (My tattoo artist and collector friends will really appreciate the “INK” instead of “INRI” at the top of this religious image.)