I had promised book reviews when I started up Tattoo History Occasionally a few months ago. So…with the holiday giving season ramping up, I thought I’d start to crank some of these out (I have a large backlog). Those of you interested in tattoo history can add some interesting items to your wish lists or purchase these for like-minded recipients.

First up, an incredible audio book, Last of the Bowery Scab Merchants, tracing the life of the Moskowitz tattoo family out of New York. This 2-cd set provides a wealth of insight into old tattooing techniques and equipment, the culture of tattooing from the 1920s through the 1980s, and more general social context. It mostly revolves around Walter Moskowitz’s experiences, but also includes stories of his father, William (Willie), who learned from Charlie Wagner. 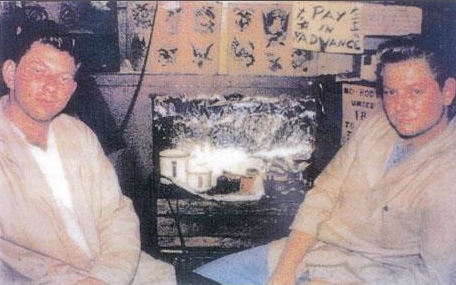 A picture of Walter and his brother (and fellow tattoo artist) Stanley, 1950s

The project is impressively produced by Walter’s son Douglas Moscowitz who narrates throughout and seamlessly ties together all the audio clips. I particularly appreciated that this is not just a recording of a guy talking, but a professional oral history carefully edited with introductions to the clips, interjected context, different voices, and even background music here and there to keep the audio lively and provide ambiance. Hearing these stories as oral history brings them to life in a way that reading the words on pages would not. Besides tattoo history, a wealth of other material made the history nerd in me happy, such as anecdotes about life during WWII.

Walter was born in 1937 and started tattooing in the 1950s. After being diagnosed with cancer (he passed on in 2007), his family sought to preserve this history for a wider audience. Interviews with other family members, including Walter’s wife of 51(!) years Rochelle, his son Marvin who still tattoos today, and a cousin who was a cop in the Bowery provide context, and a host of tattoo community people like Chuck Eldridge, Mike McCabe, and Marisa Kakoulas round out the family interviews. Disk 2 especially provides more general tattoo-history context starting with the history of the first tattoo artists and shops in New York and the development of the electric tattoo machine. I had the pleasure of meeting Marvin at this year’s New York tattoo convention, and he’s a fascinating guy passionate about tattoo history and proud of his family’s contribution; you can read more about Marvin and some interesting bits re: being Jewish and being a tattoo artist/having tattoos here.

A bullet list of some of the random highlights for me:

–The tattoo shop getting raided by police on a neighbor’s phony complaint and an officer thinking a jar of titanium dioxide dry pigment was coke.

–How and where to tattoo a horse (hint: it involves proximity to a couple different kinds of assholes)

–An interesting use for leeches

–Interesting theories about why military men get so many tattoos

–Interview with “Slats” who got tattooed by Charlie Wagner (who taught Willie Moskowitz) in 1943 for a 25 cents and then got many more from him.

–Bill “Jonesy” Jones and his painstaking machine making all by hand

–How the Moscowitzes became “the last of the Bowery scab merchants”

–The “Human Autograph” and his incredible collection of tattooed names

–Changes in tattoo iconography over the decades especially in the 60s, 70s, and 80s due to bands: a great quote as to why band tattoos exploded starting in the 60s: “who the hell is going to get Jimmy Dorsey tattooed?”

–And as a parent, I loved Walter’s parenting secrets at the end of the Disk 2

But wait…there’s more. The 2-cd set comes with a booklet that provides reproductions of some historical pictures that add just enough visuals to the oral information to give one’s mind some fodder for imagining what the spaces and people looked like while listening. The booklet also includes essays by some of those interviewed in the oral history (Mike McCabe, Marisa Kakoulas, and Chuck Eldridge) and a reprint of an article about the publicity hungry opera singer that Walter tattooed.

You can listen to some clips at the website for the project www.scabmerchant.com. You will also find there links to your various options for purchasing it. For those of you who are Amazon Prime junkies like me, here’s a direct link. A must-have for everyone’s tattoo-history library!