I recently came across the new TED-Ed “The history of tattoos” animation piece by Addison Anderson. Given that he is not someone I’ve ever come across as a tattoo history expert in my many years of studying the topic and networking with others who also do, I was very curious to see the end product, especially given that these videos are put out there as authoritative sources for teachers and high school students. Sadly, as usual with media pieces about the history of tattooing, it dismayed me.

I will readily admit that this video is better than most. It does not trot out the tired “tattoos are only for sailors/criminals/delinquents/gangs/etc.” trope nor does it perpetuate the Cook myth. However, it has some egregious gaffes and many small errors. If I were still teaching, I would have graded this as B-minus or C-plus level work at best.

The saddest part for me though is that this video could have been amazing with a round of content editing by an expert in the field! I really do crave slick, catchy video pieces like this one that might properly tell a concise history to a mainstream audience. One wonderful model for how to do these kind of things right (for those of you who understand French) can be found in this lovely piece on Berber tattooing.

What especially irks me is that TED-Ed could have had an expert review this animation when still in production to catch these errors (really they *should have* given that they are purporting to put properly vetted educational materials out there for consumption). Had they approached me, I would have charged them $50 to review it, pre-launch. $50. An hour’s work at my “cheap” consulting rate. What the TED CEO probably expenses for a lunch meeting… Some of the errors are so obvious that even YouTube watchers pointed out a couple of glaring ones (mainly the mispronunciation of “Maori”).

So I contacted TED-Ed to point out that the piece had errors they might want to correct (I also tagged them on a Twitter post). “Sara” in their Web Support division got back to me very quickly and ensured that “TED-Ed does fact check all of our lessons, including this one, but we’re sorry to hear that you found some errors.” She then continued: “We try to be as accurate as possible in our work, so it would be incredibly helpful if you could send us the time codes and/or quotes with what you are finding inaccurate, and provide any links/research that shows us where the accurate information might be.”

0:08–Tattoo artist is not wearing gloves (the backwards baseball cap places this scene firmly in the post-sanitation-standards era of tattooing).

1:12–The Polynesian root of the English word tattoo is misspelled as “tatao” in the graphic (it should be “tatau”). [ETA: they fixed this error–clumsily–but they did fix this error (pause it and you will see the misspelling lurking behind the superimposed correction). Small victories…]

1:16–Although James Cook certainly lived in Tahiti for three months in 1769 and helped to bring back the word “tatau”, other explorers also visited Tahiti and elsewhere in the Polynesian islands and may also have been influential in importing this word into European languages. Expeditions led by Samuel Wallis and Louis-Antoine de Bougainville visited various parts of French Polynesia including Tahiti in 1767, two years before Cook arrived there. People involved with both of these pre-Cook expeditions specifically commented on the tattoos, and one of Bougainville’s volunteers, Charles-Félix-Pierre Fesche, created a dictionary of Tahitian terms which included “tatau” as one of them. The French word “tatouage” and many other European terms for tattooing (Tätowierung, tatuaggi, etc.) also derive from the same Polynesian root.

1:33–“Stories of Cook’s findings” certainly did not “spark a craze in Victorian English high society”! The mid-to-late 18th century is a long, long way off from the late 19th century!!! Tourist visits to Japan post its “opening to the West” by Matthew Perry et al. and other then-contemporary factors sparked said Victorian craze.

1:47–The Victorian tattoo fad among elites was hardly “behind closed doors”. Many of these folks were quite open about their tattoos, and they were written about in a variety of newspapers and journals at the time.

1:54–There is absolutely not a shred of evidence for a Queen Victoria tattoo, according to fellow scholar Matt Lodder who has deeply researched this. It is not even worth mentioning as “reputedly”. There are so many equally newsworthy but legitimately tattooed celebrities from that time period who they could have chosen as examples to use (and then they could have dropped the “reputedly” too). For example, King George V had two very well documented tattoos–a dragon he got in Japan and a Jerusalem cross tattoo he got in the Holy Land.

1:59– Oh where to start on “and tattoos became very popular among Cook’s former soldiers”! First, Cook’s “soldiers” did not live in the Victorian era. Second, they were not “soldiers” but sailors. Sigh……..

2:03–There is no evidence that the symbolic iconography of sailing milestones cited in the animation existed during Cook’s time. Those are meanings that became associated with those particular designs later, perhaps much later. I’ve never come across a turtle tattoo in the British Description Books that tracked tattoos on sailors in the 19th century. Anchors, sure, plenty of anchors, but there is not anywhere near enough textual evidence to pair specific designs with that kind of meaning until much later in the history (and even then, it is evidence based in folklore usually, not written evidence).

2:10–First mispronunciation of the word “Maori”

2:14–We don’t know exactly what tattoos the Crusaders got. We really only have hard evidence of Jerusalem-cross tattoos from pilgrims to the Holy Land from the 16th century on (the Crusades ended in the Middle Ages). Also Jerusalem cross tattoos were not giant single crosses on people’s chests!!! Rather the Jerusalem cross looks like this (the top image below), and as far as my research shows was usually on the arm. 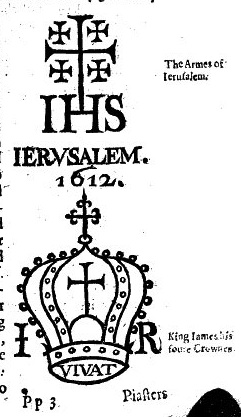 2:25–There’s no clear evidence that the markings on the Picts were tattoos. There have been several long discussions about this on the Tattoo History Daily Facebook page.

3:30–Not all Japanese tattoos covered up penal marks!!! Some may have, but most of them were inscribed on the bodies of people with no criminal history. Also penal tattooing was outlawed in Japan in 1872.

3:45–Another mispronunciation of “Maori”

(And there are other small things. Tattoo scholar friends, feel free to weigh in with additional feedback in the comments below!)

I appreciate that some of you out there might think I am being nitpicky or curmudgeonly or nasty or snotty or what have you to post this list of corrections publicly on my blog. I honestly have no ill will toward TED-Ed or Addison Anderson. As I said, with the content errors fixed, this could have been an amazing piece. But this animated short brings up a much deeper issue for me–one that is a particular pet peeve, and I am going to use it as an example.

The move to devalue content and forego expert review of material results in purportedly “educational” product that instead has been written by non-experts for free or very cheap. When packaged with slick, catchy visuals, this type of information becomes especially dangerous as it takes on an air of authority it does not merit. Then when such a problematic product gets specifically marketed to the public as quality education, that is the perfect recipe to make me really, really mad because it becomes the very antithesis of education.

The problem is not just that people who are TED-Ed fans might get misinformed. These videos get covered by multiple news outlets and taken as complete truth then disseminated to a much wider audience. A couple of examples: Yesterday’s Huffington Post featured the video and copied the “tatao” mistake! And Bustle missed the “reputedly” part of the Queen Victoria myth and instead related it as fact.

Such pieces also rise to the top of the search engine results because of the search-engine-optimization talents of employees dedicated to such things at giant media forces like TED. This further spreads the reach of error-ridden media pieces. Just now, Google searches  on “history of tattoos” and  “history of tattooing” turned up this video on the first page of results both in its home on the TED-Ed site, on YouTube, and in articles covering it. Not only does this video now become one of the main things people will watch when looking for information on the history of tattooing, its position on the first page of results makes people think it is even more authoritative.

How amazing would it be if this were a higher quality piece with nearly flawless content? Then tons of people would be getting excellent tattoo-history information. Wishful thinking…

Please, media giants, add in one small step to your production process and hire real experts in the field to edit your content. Most of us will work for you for a very reasonable fee. Don’t you want to be putting grade A content out there instead of mediocrity? And so, if you happen to use my suggestions to correct this video, feel free to send me a check for $50. My PO Box is listed on my contact page…

4 responses to “TED-Ed Does Tattoo History…Sigh”