Four recent tattoo projects with which I have been involved acutely highlighted the need for better analytical data to understand how tattooing has changed over time. In all of them, I was tasked with trying to determine how much the tattoo world has expanded since the 1960s. There are no good, specific answers!

I feel safe in saying that more people are getting tattooed today than in 1960 and more people are getting bigger tattoos (but by what percentage change?). New designs have clearly been introduced to tattooing and have become canonical (but exactly when did these start being rendered and by who?). I also feel safe in saying that the percentage of tattoo shops per capita has increased considerably (but by how much??? who knows?). I can also say without hesitation that tattooing has become codified as an industry and as part of this shift a standard protocol for health and sanitation practices has become widespread (but when exactly did this become standard practice by a majority of shops?).

So, I’ve put together the first of what hopefully will be a series of investigations that will yield some foundational data upon which future research can expand. Behold the “Tattoo Business Historical Survey and Baseline”!

Since I am almost as much of a numbers geek as I am an archives geek (here’s one of my non-tattoo numbers projects), I thought to launch this project to collect hard data on the changes in the tattoo business, so that not only now, but centuries from now, tattoo historians such as myself might be able to find proper quantitative and qualitative data to mine to understand trends and changes over time.

The survey is designed to arrive at information about trends and changes in the business of tattooing over the past 50-or-so years and is intended for tattoo artists to answer. Please help spread the word and share widely! Tattoo artists are generally very busy people so any assistance in getting a significant number of artists to participate would be much appreciated. 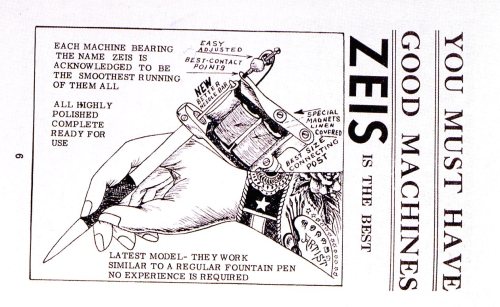 Also, as a long-time member of the tattoo community (I got my first tattoo in 1990) and as someone who once wanted to be a tattoo artist herself (but who realized, smartly, that you kind of really need to know how to draw properly to tattoo), I very much understand that tattoo artists are often quite reluctant to talk about their industry. So tattooers, I would be honored if you would set aside a small amount of time to help begin to create a better archive of information about tattooing for posterity. Many of the questions are optional, and, of those, you may skip any that make you uncomfortable.

Solid data about the percentage of various populations who have tattoos in the 2010s are out there from the Harris polling group, from the Pew Millennial study, and a few other non-American sources, but historical numbers with which to compare them are not (I’ve written a little bit about the extant historical evidence here on population percentage). Frustrating that we can’t compare these to the past, but at least we have some decent estimates of present practice moving forward. Other tattoo surveys have focused almost exclusively on the people who get tattoos, not the people who inscribe them.

Thus, when we turn to trying to find data about the business of tattooing, there is absolutely nothing trustworthy. Information at sites like statisticbrain.com are fraught with a lack of proper citation and combine some hard numbers with what can only be construed as sheer guesses. Such search-engine-optimized, revenue-generating web pages created by non-academics and non-tattoo-community members unfortunately get cited in major media pieces as definitive sources because there is nothing better out there to cite. So with this first survey, I thought I’d focus on how the tattoo business has changed logistically and economically over the past 30 years or so and to try to get some more accurate data about the current state of the business.

Two of the burning questions that come up in tattoo-business media pieces are: how many tattoo shops are there and how much money are people spending on getting tattooed? The only recent answers I could find seemed pulled from thin air and can be traced back to two sources, a US News and World Report article from 1997 and a 2007 Inc. magazine profile of Mario Barth and his chain of tattoo shops. The figures were estimated at 20,000 shops in 1997 and 15,000 shops in 2007. If that is true, the decline in shops over the past decade or so would seem to contradict the rhetoric of an ever-expanding tattoo market. I’m not sure that the number of shops question can even be answered, but other questions can help to identify trends. The annual sales (at least in the United States) have also been estimated to have gone down from a figure of $2.3 billion in the late 1990s to $1.65 billion today although it is unclear how either figure was arrived at.

Some of the other issues that have come up as I and others have been conducting research into contemporary tattoo history have to do with how people become tattoo artists (apprenticeship, learning on their own, etc), how the business practices have changed (health and safety issues and when they were implemented, what supplies and technology are most common, etc.). So the survey features a variety of questions to help understand these aspects of early twenty-first century tattooing.

What are some of the uses I envison for this data? As a tattoo historian, one of the most frustrating aspects of writing about the history is a lack of recorded specificity especially re: the dates on which certain changes in technology, image design, and the like happened. For example, I know from researching early machine history, it’s been very frustrating trying to figure out when the shift was made from hand tattooing to machine tattooing—clearly it was gradual, but it’s unclear by what date hand tattooing had become pretty much obsolete (and, of course, now it’s making a resurgence!). We know that Samuel O’Reilly patented his electric tattoo machine design in 1891, but it’s unclear by what date it had become commonly used; some artists were still hand tattooing well into the 20th century. How wonderful would it be if we had survey data where artists had recorded which year they started using an electric machine. The trends could not only be tracked by date, but by things like geography (provided the artists had given their location).

Some of the questions I’ve had with respect to the contemporary tattoo-business history that I’m hoping this quiz might answer are details like: When did gloves become commonly used? From my own anecdotal knowledge getting tattooed in the 1990s (with some of my early tattoos done without gloves), it would appear that the switch to wearing gloves was all but complete by the mid 1990s. But perhaps not. This is why it is so important to try to support anecdotal knowledge (which is what MOST tattoo history uses) with hard data. Sometimes what appears the be the case from anecdote, when more deeply researched, is proven to be untrue.

Another example of what this survey data might offer has to do with business structure. As far as I can tell, the majority of tattoo artists have a financial arrangement with the shops in which they work where they pay a percentage of each tattoo to the shop owner. But some also rent booths/stations. Some shops include certain supplies as part of working there and in others artists have to provide all their own materials. It would be fascinating from an economic-history standpoint to be able to track changes in the business model over time. So some of the questions in the survey are designed to serve as a baseline for subsequent research. How cool would it be if we had a large data set to compare from the days of tattoo artists working in booths in arcades and their financial arrangements? But with this current data set, historians of the future can make comparisons with whatever business model might emerge.

Lastly, I know this survey is not perfect, that there are many other questions I could have asked. Tattooers might be interested in different information than what I am seeking, as someone who has been part of the tattoo world for over 20 years as a consumer and scholar but not as an artist or business owner. So there is a field at the end where people can suggest questions for future surveys. Suggest away!

Note: To ensure some modicum of accuracy, the survey requires logging in to a Google account so that respondents can only answer the survey one time. I realize this may prevent some people from answering the survey who don’t have Google accounts or don’t want to create one. However, since Google does not allow form creators to see what usernames actually answered the survey, you will be anonymous, unless you provide your email for followup.

Important note: All survey responses are confidential. As a PhD-trained researcher, I deeply respect the confidentiality of information provided.