If you have an interest in tattoo history, you must add Drawing with Great Needles: Ancient Tattoo Traditions of North America to your book collection. I can’t emphasize this enough! In it, editors Aaron Deter-Wolf and Carol Diaz-Granados and their team of authors have put together an incredible collection of essays that introduce a wealth of new tattoo history material to the world. Most of the material focuses on Native American tattooing, but bits of Euro-American tattoo history creep in (especially with regard to the historical tattoo collectors I have studied in great depth–the transculturites who obtained tattoos while residing with Native American groups) and some scholarship about other non-Western societies offers comparison. Aaron’s essay about the archaeology of tattoo tools is especially welcome (and captivating) as there has been limited writing on this aspect of tattoo history outside of the machine era. 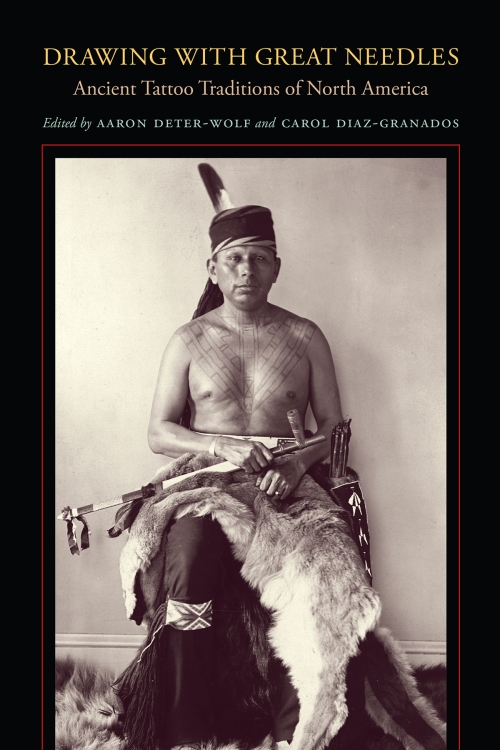 The cover of Drawing with Great Needles featuring “the tattooed Osage chief Bacon Rind [all you bacon fanatics will love this] (1860-1932)” from the National Anthropological Archives, Smithsonian Institution.

The current work in tattoo archaeology constitutes some of the most fascinating research in the history of tattooing. For too many years, the study of tattooing was nearly absent from archaeology, save for the investigation of a handful of preserved human remains, often in the form of mummies. But because of the social stigmas around tattooing that started in the late 19th century, right around the time that archaeology as a discipline was ramping up, archaeologists, when happening across artifacts, did not conjure socially unacceptable cultural practices like tattooing. But, as editors Deter-Wolf and Diaz-Granados mention in their introduction, tattooing has always “been as natural as any other cultural ritual.”