Travel narratives about Holy-Land pilgrimage tattoos are one of my go-to evidence banks for demonstrating the significant presence and visibility of tattooing in the early modern period (defined as approximately 1450-1850). William Lithgow’s travel narrative (in its various editions) represents probably the most often-cited example of these texts. I’ve lectured many times about the “surprising” nature of what Lithgow writes about tattooing (surprising…only if one believes in the Cook myth), but not published these thoughts. A recent request from a fellow body-art scholar to recap part of a recent talk I gave about Lithgow and other early-modern tattoo wearers made me realize I should write the Lithgow material down for broader dissemination. In doing so, and in relooking at the texts, I had some new epiphanies. So here you go, an updated analysis of the tattoos of 17th-century, Holy-Land pilgrim, William Lithgow:

In 1612, the Scottish traveler and author William Lithgow, apparently along with several companions, obtained tattoos in Jerusalem. This was not a novel idea: pilgrims before him and many more after him had received similar marks of piety. Had Lithgow and others not written about these tattoos, we might not know about them. Standards of dress and the conventions of portrait painting during the early modern period dictated that little skin be shown in formal representations, so images like Lithgow’s portrait in the frontispiece of the volume, costumed in exotic finery from his travels, do not show him as tattooed. (Later, a few travelers, such as German diplomat Heinrich Wilhelm Ludolf, did proudly roll up their sleeves to display their tattoos for visual posterity.) 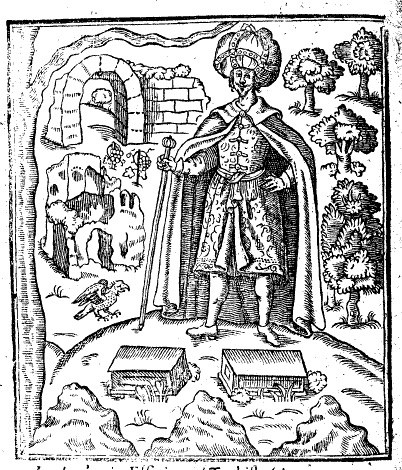 The frontispiece to the 1632 edition of Lithgow’s narrative

In the first version of Lithgow’s narrative about his travels published in 1614, he writes:

“In the last night of my staying at Jerusalem, which was at the holy grave, I remembring that bounden duty, & loving zeale, which I owe unto my native Prince; whom I in all humility (next and immediate to Christ Jesus) acknowledge to be the supreme head, and Governour of the true Christian and Catholicke Church; by the remembrance of this obligation I say, I caused one Elias Bethleete, a Christian inhabitour of Bethleem, to ingrave on the flesh of my right arme, The never-conquered Crowne of Scotland, and the now inconquerable Crowne of England, joyned also to it, with this inscription, painefully carved in letters, within the circle of the Crowne, Vivat Jacobus Rex.”